Converting between Volumetric and Mass Flowrates

This page shows screenshots from the professional units conversion program "Uconeer" from Katmar Software. There are two separate calculators illustrated below for converting between mass and volumetric flow, depending on whether the fluid is a gas or liquid.

This function will allow you to convert between volumetric flow rate and mass flow rate for gases. If you know the gas density you can enter it directly. If you do not know the density the program will estimate it for you from the molecular weight using the ideal gas law, or using the gas compressibility if you know it, or it will estimate the compressibility from the critical data using the Peng Robinson Equation of State. 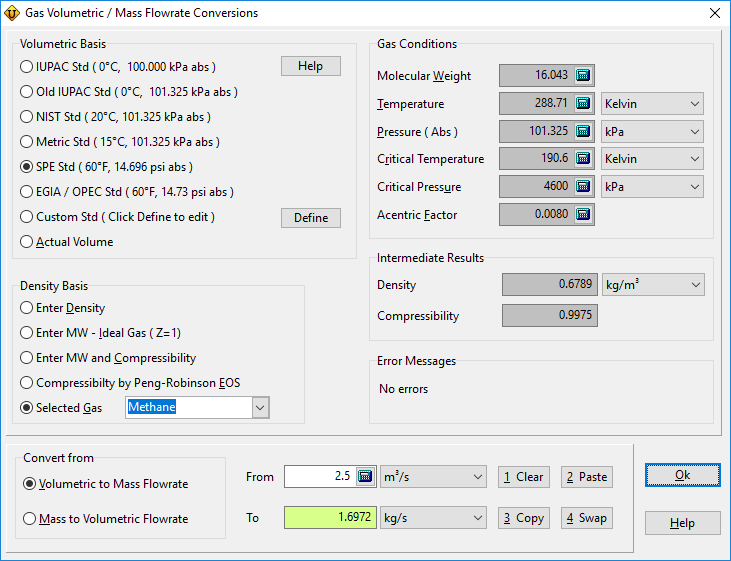 In this example methane has been selected as the gas. The calculator is being used to convert a volumetric flow at the standard conditions defined by the Society of Petroleum Engineers to a mass flow rate. It also shows the estimated density and compressibility (Z) for the methane at the SPE standard conditions.

The flowrate conversion function for liquids is similar to that described above for gases, but is much simpler. All that is required is for the liquid density to be entered, the direction of conversion to be selected, and the known flowrate to be entered. 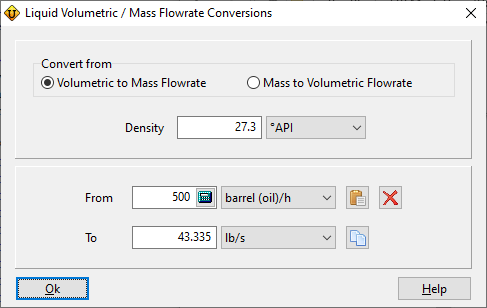 In this example a known volumetric flowrate of a petroleum product is being converted from barrels per hour to pounds per second.